Into The Void the Guitar tablature.

The construct of the song Into The Void at first glance seems to be a standard doom metal song construct; but there are other components at play. Black Sabbath makes the song sound very fluent an easy to perform, with the use of pentatonic scale and harmonic minor key of C#. If you have  a close listen one would note that guitar lines and bass lines are at odds with each other throughout the verses which creates a pleasant juxtaposition of sounds; opening up the flow of different dynamics coming the difference in notes from the bass vs. the guitar parts.

Into The Void How To Play

This is a guitar tutorial lesson on how to play Into The Void by Black Sabbath from their album Masters of Reality released in 1971.  The tune is primarily based on C# minor pentatonic and the use of C# harmonic minor scale. Into the void is a true metal classic in every sense of the word. You will note when listening through the track, into the void brings a lot of the now popular flavors that are attributed to doom metal, black metal and many assorted varieties known within the heavy metal genre. Tony Iommi and company were the starters of it all.

The scale positions would be for E standard tuning in a regular tuned guitars case, but don’t forget the song into the void is in C# tuning so the open 6th string would be in the tuning of C#. Hence the tuning of each 0of the 6 strings would be as follows: 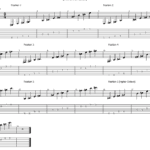 For this song Iommi used a 1964  Gibson SG Special  which became affectionately known as the monkey; there are many articles about the origins of this guitar and how it came about to be in Iommi’s possession. Needless to say it was the perfect guitar for him; so much so that he recorded all of the original Black Sabbath lineup songs with it.  This legendary axe included the infamous P90 pickups which are very much attributed to Tony Iommi’s sound. 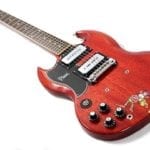 One of the interesting things about the Monkey is that the pickups were P90s. The idea that the legendary Tony Iommi tone — the one that, for all intents, basically created and codified the sound of heavy metal.