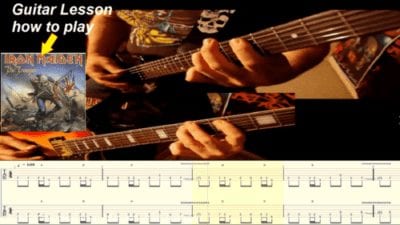 This is a guitar tutorial lesson on how to play the heavy metal classic: The Trooper by the almighty Iron Maiden. A true classic in every sense of the word. Included is the tablature that you can find right here: The Trooper transcribed by J. Shadows

To get a close resemblance of the original tone you’ll need the following:

Adrian Smith and Dave Murray use similar equipment though their playing styles are quite different. If you are an Iron Maiden fan and are familiar with some of their music, you should be able to pick out Dave Murray’s style as opposed to Adrian Smith’s.

First things first, Dave Murray has always been a Fender stratocaster guy throughout his entire career with Iron Maiden. From the research I conducted, it is hard to find early onset images of him in Iron Maiden without playing a stratocaster. In later years images I have seen some instances of him playing a Gibson Les Paul.

A quote out of an old article from 1983 guitar world article: “The Strat is my favorite, but I also have a Les Paul which I use occasionally, and I just picked up a 1961 SG Les Paul with all the original parts.”The guitarist’s amplifier setup is the Heavy Metal standard, four fifty-watt Marshalls with Marshall cabinets. “One cab’s got EV speakers in it, which are miked-up for the out-front sound. And the others have Celestions, which are a bit more dirty.”

As for Adrian Smith: “I just mainly use two guitars, the SG Standard and an Ibanez Destroyer with stock parts. For effects, I use an Ibanez Tube Screamer, a Micro Amp for power boost on the solos“

Both guitarists use Marshall JCM 800’s with varying changes of effects.