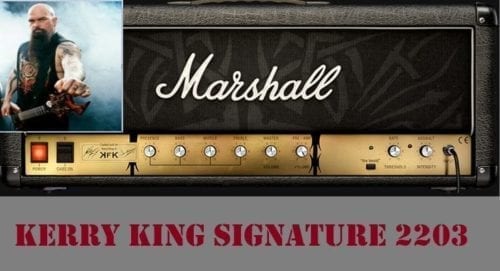 What can be said of a Marshall amplifier that is referred to as the beast? The name is very fitting as the original version of this Marshall amplifier belongs to none other than Kerry King of Slayer. His many trailblazing years which consisted of rich, heavy, and aggressive Marshall guitar tones helped create thrash metal as a genre; more than 4 decades ago! And it is still a guitar tone that is highly sought after all this time. Classic albums such as Hell Awaits, Reign in Blood and Seasons in The Abyss were all forged through that Marshall 2203 known as ‘The Beast’.

Throughout Kerry’s career he has gone through some different guitar brands. Most notably comes to mind is the BC Rich. I love the look and feel of those guitars, and am sad to see that he is no longer endorsed by them. But I digress, and I’ll get off the guitar comparisons. That can turn into a rabbit hole unto itself.

As far as Kerry’s choice of amps and cabinets, Marshall has always been his number one choice and it has carried him through an impressive career spanning 40+ years. The sound of a cranked Marshall amp sounds beautiful and heavy as hell, almost as if you are summoning the dark one himself. That being said you’ll have neighbor noise complaints that come with that kind of an amp for sure. Softube has got your back though, and the solution is in a VST format.

A quote from the trailblazer himself: “If you released Reign in Blood today, no one would give a shit. It was timing; it was a change in sound. In thrash metal at that time, no one had ever heard good production on a record like that. It was just a bunch of things that came together at once.”

What’s inside the Beast

Both Kerry and Softube collaborated to recreate the VST version of the now discontinued Kerry King Marshall KFK/2203KK 100 watt head. The amp itself is a modified Marshall JCM 800 with KT88 power tubes rather than the more standard EL34 tubes. Another addition to Kerry’s sound is the use of an EQ boost and gate circuit which is what makes the Beast such a nice well rounded thrash metal gem.

The beauty of this unit is that Softube has recreated an amp with particular attention to even the most minute details,  replicating every nuance and quirk of the original Marshall KFK 2203. The beast button being engaged encompasses the features of an EQ boost and noise gate options. This simulates an MXR 10 band that was used originally for boost, to shape the tone that creates that Slayer sound he’s famous for.

Softube has recorded impulse responses from Kerry King’s own Marshall Mode Four 4 x 12″ cabinets (which include Celestion G12K-100 12″speakers) at the Henson Recording Studios in Los Angeles featuring multiple professional mic placements and selections designed by iconic producer / engineer Terry Date. Famous for his work done for albums by the Deftones, Pantera, Dream Theater and my personal favorite Overkill. These impulse response (IR) tones,  do not disappoint and are not for the faint of heart when it comes to Marshall tones.

Furthermore, some of Kerry’s live stage show sound was captured from a Stockholm show in 2018 by engineer Chris Paccou. To further capture more samples of Kerry’s aggressive Marshall guitar tone. So as you can see there  is a enormous variety of sounds and varying textures that encompass the sounds you’ll find in this plugin, even a customizable section which is cool to experiment with creating you own Marshall 2203 K.K. tones. 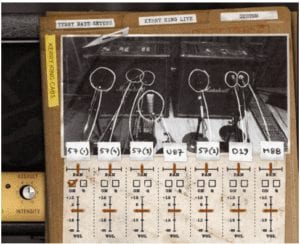 Another great feature of the Marshall K.K. 2203 is that there are samples for the Kerry King cabs mastered and engineered by Terry Date. The samples of sounds are as follows:

And finally as if there wasn’t enough metal tones to play with;  there is a custom tab included. This gives you the option to customize your own tone to your hearts content, with a choice of all the IR’s that were included in the Terry Date sessions and you can mix and match to create your own sound.

This Marshall 2203 Amplitube vst gets an 8/10 in my eyes. It is very versatile, as it adheres to the original Marshall sound when the beast mode is not engaged, and when you engage the beast dial it turns into a thrash metal monster. I had the opportunity to test it out with a medium output set of pickups and there was a lot of tone to get out of this vst.  This amp vst is a hard rock guitarists dream if they’re not looking to shell out $2,500 bucks for the real deal or if living situation does not permit 100 watt Marshalls cranked at level 10 at this current point in time.I’d recommend checking out the presets developed by the King himself. There are 5 rhythm tones available that Kerry created himself along with other impulse responses available courtesy of  world renowned engineer Terry Date and Chris Paccou – Layerès Live sound engineer.